If you’re an amateur musician, or were a musician at school, you’ll know that one of the busiest months is December because of Christmas concerts. I’ve never really got the moaning over hearing Christmas songs for this reason - on average, we probably start practicing the music around September or October, so everyone else has it easy in my opinion.

As a bari sax player, my seat is next to the bass trombone (because we usually have similar parts, although bari sax jumps around and joins basically whatever section it feels like a lot more than bass trombone) and last year our bass trombonist had really sick fairy lights wrapped around the upper part of his instrument. It’s sort of a tradition that the second half of our christmas gig at big band is jazz flavoured christmas music, and as a “surprise” we all come out in santa hats and reindeer antlers, so lights and tinsel come along with that “surprise”. He’d not personally made them and they weren’t designed for the instrument, but I had a lot of envy. I wish I had a photo for this blog, maybe I’ll see if anyone took any of that gig later.

Anyway, around October I remembered this and that I’ve tried doing my own instrument related hacks in previous years and failed, generally due to trying to do too much. In particular, when I lived in Bristol (during my industrial year) I wanted to have a strip of neopixels running down the back of my bell which would listen to what I was playing and vary the colour based on pitch and the brightness based on volume. I don’t remember how far I got, but somewhere around the “physics is hard” part I gave up.

So, this year I decided I’d start, super, super simple.

I went on Pimoroni and bought the following:

I don’t really need more arduinos for this project - I have probably 50 GEMMAs kicking around my house, a few trinkets etc but I bought these two boards (which are something around £20 each?) for the following reasons:

As it turned out, the rings were the perfect diameter for my bass clarinet, and clarinets in general have much fiddlier and less spaced-out mechanisms than saxophones, so the rings both went on my bass clarinet and the strip wrapped around my baritone.

Well that was a bit bloody quick @pimoroni ! Reckon the rings will look best on my bass since they’re (almost) the same size pic.twitter.com/1gBCW9vimp

Since my bass clarinet was at the time my new baby, I started on that one - it was also the more complicated build since I needed to space the neopixels to fit onto each pad. I did this quite crudely by cutting a long length of wire, putting it through the hole on one end then taking my cutters and cutting it with the neopixels stuck to my bass clarinet. To make sure there wasn’t too much strain on the wire I did also leave a fair amount of slack. This also helped me later if I needed to make changes or the wires failed or ripped as it means you can do repairs.

I think version 2 I'll make all the wires black, but so far so good - measured the input/output wire by physically sticking them on and then cutting, as you do. Keeping testing to make sure I don't end up with no pad movement which would be fairly bad mid-concert pic.twitter.com/kBcrzp9sXv

I was quite keen to make this project look good and finish it to a high standard. One of the things I wanted to do here was make all the wires black so that it would blend in with the clarinet. This actually proved more difficult than I thought -

I went on a whole journey around this, bought lots of wire on amazon which I then returned because it was too thick, even drove to an RC shop 30 minutes from me. In the end, I discoved that RS components have a trade shop in Watford which is nearby. Unfortunately, RS isn’t really meant for makers (hence why I miss Maplin now it’s gone for sunday hacks) so I bought…err…I think it’s a 100m roll of thin gauge black wire. That will probably last me a lifetime so if anyone needs very thin black wire, I’m your gal.

Initially though, I took apart some mini JST connectors which I had from a previous project. I highly recommend NOT doing this because the wires from those connectors are REALLY, REALLY small and flimsy so that was a big waste.

So the wire I got from the RC shop turned out to be waaaay too thick, and amazon sent me red wire, not black, so I settled on canibalising some thin cables from the mass of JST cables I had from a previous project.
Also found an @adafruit gem in my box so added to the chain pic.twitter.com/xelkXBj2yV

In addition to that, having soldered up the whole lot, I turned it on and…boom. Something went wrong with my soldering maybe and now my rings just won’t light past the first couple of LEDs on one ring, and the second board was very similar (might have been 2? Don’t remember).

Anyway, as mentioned in the tweet, I’d found a jewel which I’d never used for anything (I believe either @ukscone or someone else bought me this as a birthday/graduation gift a long time ago, so thank you whoever this was!) so I thought I’d strap that on the end. Turns out this jewel is RGB, not RGBW, so the kablooming of the other LEDs at least gave me a reason to buy some rings which were the same signal type. Swings and roundabouts.

Having fiddled with the electronics for a while, I started to do some “coding”. By this I mean, stealing sketches or examples from other people. For the first pass I was keener to make sure it all worked, looked good and didn’t damage the instrument than I was to fiddle with LED patterns, so I started with a test sketch from a paintbrush library. This turned out to create a somewhat unintended effect:

“I might get rid of the top one”
Bf: why?! That’s the best bit!
Me: it’s meant to be doing the same as the other two, I don’t want to induce epilepsy during my gig pic.twitter.com/BhmmAieOng

I’m still not 100% sure what the problem was here, I think it’s a combination of:

For the former, I tried using a voltage regulator to bring it up to 5v. This completely changed the colour of the LEDs to something I’d not told it (was like greeny/reddy) so that made things worse. For the latter, I tried using capacitors at the edge of each board. This proved entirely pointless.

In the end I moved on to using a sketch from the Adafruit Xmas lights tutorial and this worked just fine.

#bassClarinetXmasLights looking a lot more finished - I’m getting around the header pin issue bu just soldering to them, that should make it easier to reuse it later (and also test things out like buttons etc) pic.twitter.com/IwfLXt4AGh

This is all well and good, but I wanted to diffuse out the light a little to make sure I didn’t distract the people sitting next to me or blind those on the front row of the audience (which, as it turns out, front row was very very close to the band so this was a good idea).

I was out in York at the time texting my dad, who has a 3D printer and loves making stuff that solves a problem, be it for him, my mum or my brother in law. So as he was texting me about his latest print endeavours, I decided to ask if he could come up with a diffuser design. I’d already been texting about the powering and flickering problems, so it was a natural cadence.

By the time I was back to our Airbnb in York, having only sent him a couple of links to the stuff I’d bought and not having measured the actual tollerances on the boards whatsoever, my dad had already designed a print, printed it, and cut out some milk bottle plastic circles to act as the diffuser material. 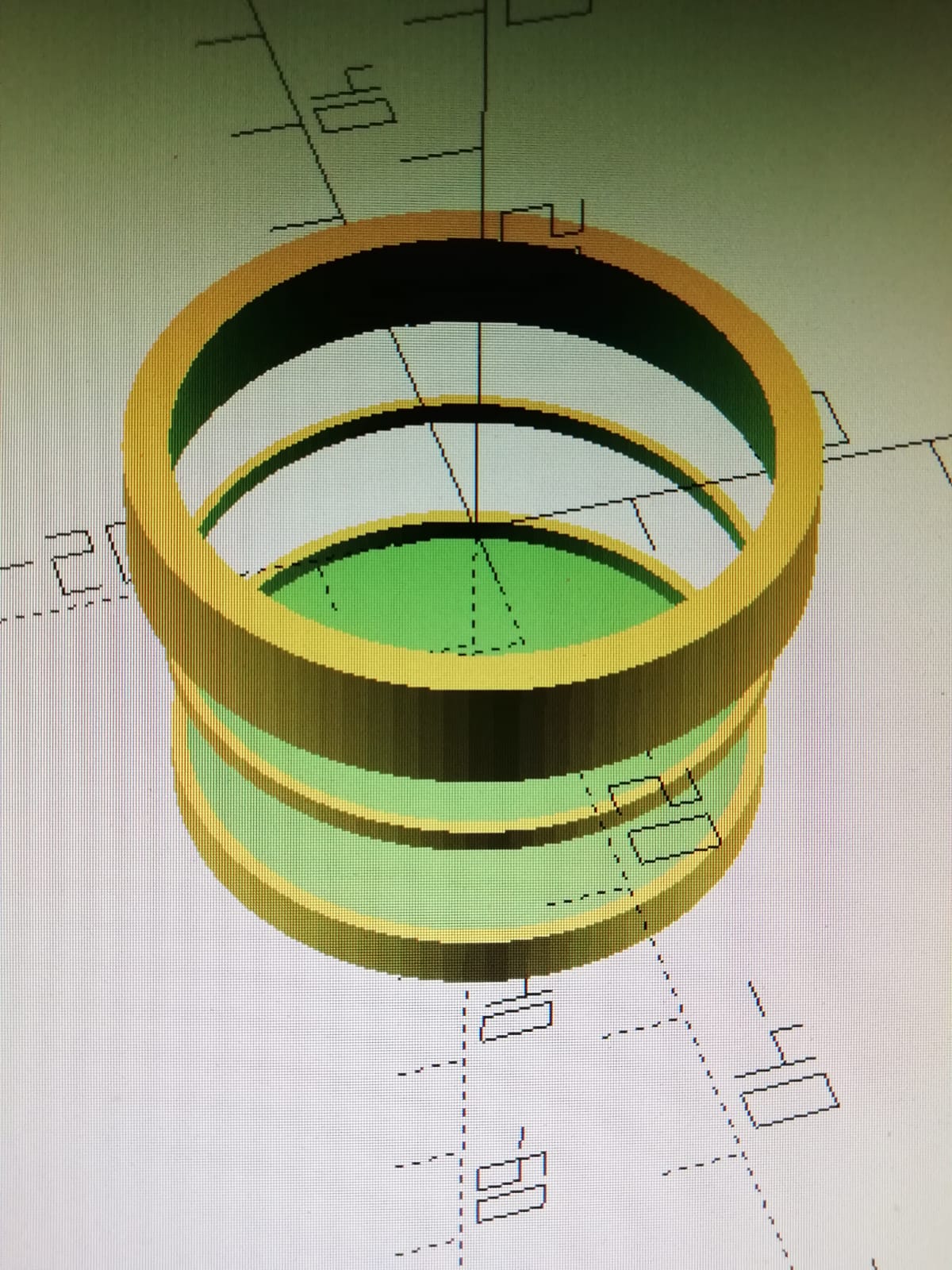 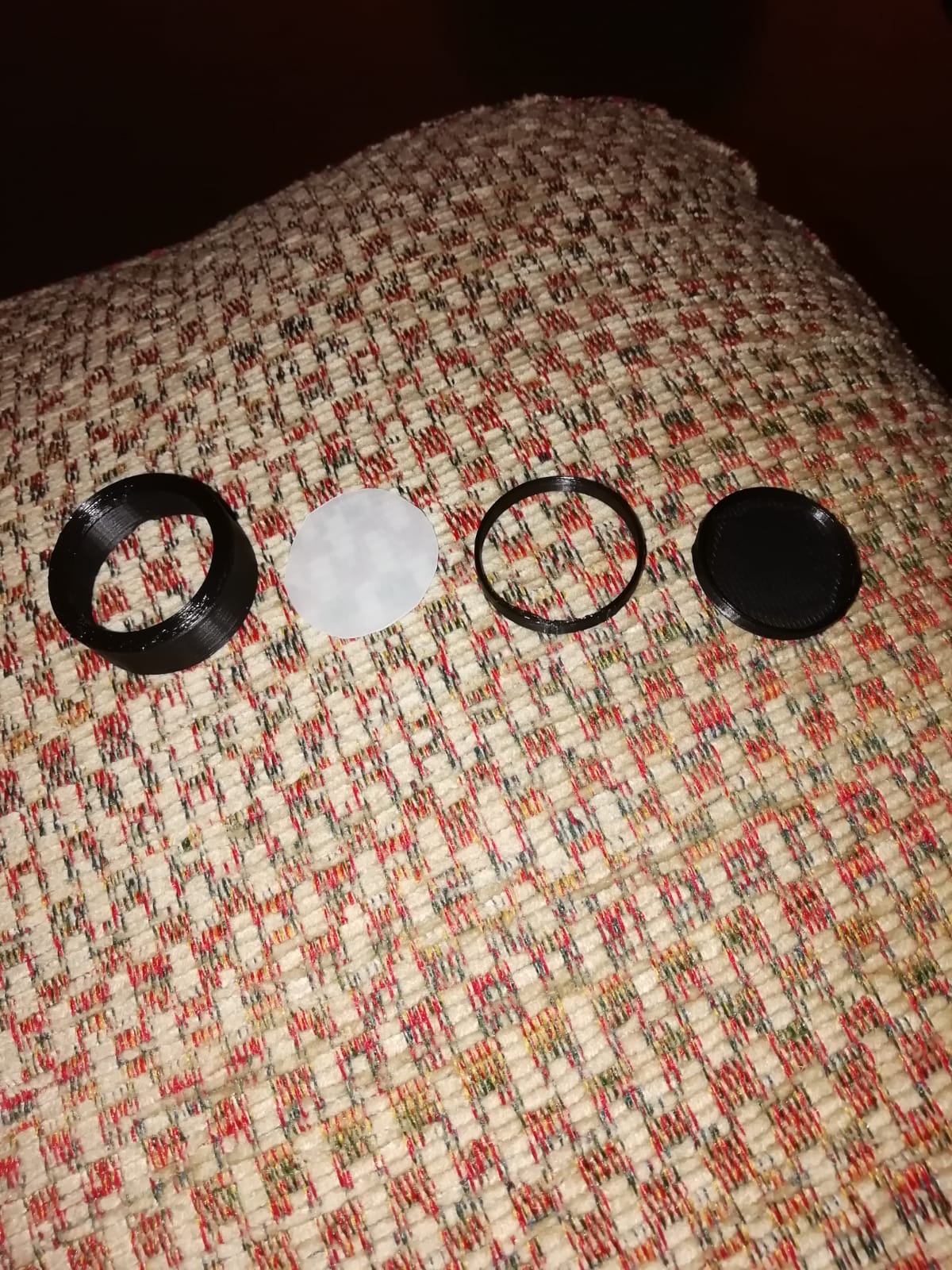 A few weeks later I was back at my parents house, while there I desoldered a bunch of connections to make them fit properly in the cases and took the lot back home where I turned it on.

Hard to tell with twitters crap video quality but #bassClarinetXmasLights diffuser cases are looking good (dad 3D printed the sides and base then cut milk bottle plastic up to use for the diffuse part) pic.twitter.com/j2QXgxzxV1

Things were finally coming together.

I felt that the bass clarinet lights were pretty much done at this point so I moved on to the easier build for my baritone sax. Turns out you can use up 2m of LEDs quite easily given the size of the instrument:

When I bought 2m of LED strip, I wasn’t sure I’d need it. Turns out it’s not that hard to use up doing this #bariSaxXmasLights pic.twitter.com/Ji7ZguCntr

There’s not as much to note here on this build - I pretty much just needed to solder a 3 wire JST connector to the other board and I was done. To make sure it all played nicely though, I did test out the strip to Lana Del Rey:

I did attempt to do a bluetooth connection to my phone to see if I could control it and/or allow me to turn it off should it be annoying to people, but I could never get this to work despite using the official Adafruit app and sketch. Next year’s job.

Again, I wanted the LEDs to be diffuse. I’m not sure whether I actually liked the resulting effect here, but my assumption when “building” the diffuser was the steps would be simple:

Turns out waxed paper (which is what baking paper is) doesn’t play well with sellotape or plastic, so what I ended up doing was wrapping several layers around it tight and then kind of tension taping it all together:

Here’s the final tweet from my gig (photo 1 taken after assembling my instruments and sticking copious amounts of velcro on, photo 2 taken after completing the gig):

Overall, gig went really well - we were playing half disney, half christmas music this year so everyone knew the tunes and despite me spending far more time building my decorations than actually practicing, the reception was good from band members and audience members alike. The lights probably went down better with my bandies than audience (you can’t fully see the lights because I was bang in the middle, which given we were playing in a theatre meant that the lights had the most intensity directly over me), but whatever. It was fun.

My boyfriend suggested next year we do pyrotechnics (I’m thinking flame thrower in the bell), but apart from that, what I hope to do next year is

If I get bored/achieve one or both of those, maybe I’ll get back to adding a microphone and doing all the physics shit for colour changing. I doubt it.

At work now there are hackdays once a month (I’ve changed job again), so I’m hoping at the first hackday I can bring the lot in and work on the first point, to exemplify that you can work on stuff that’s not directly related to work.