For the past couple of months I’ve been working toward turning this: 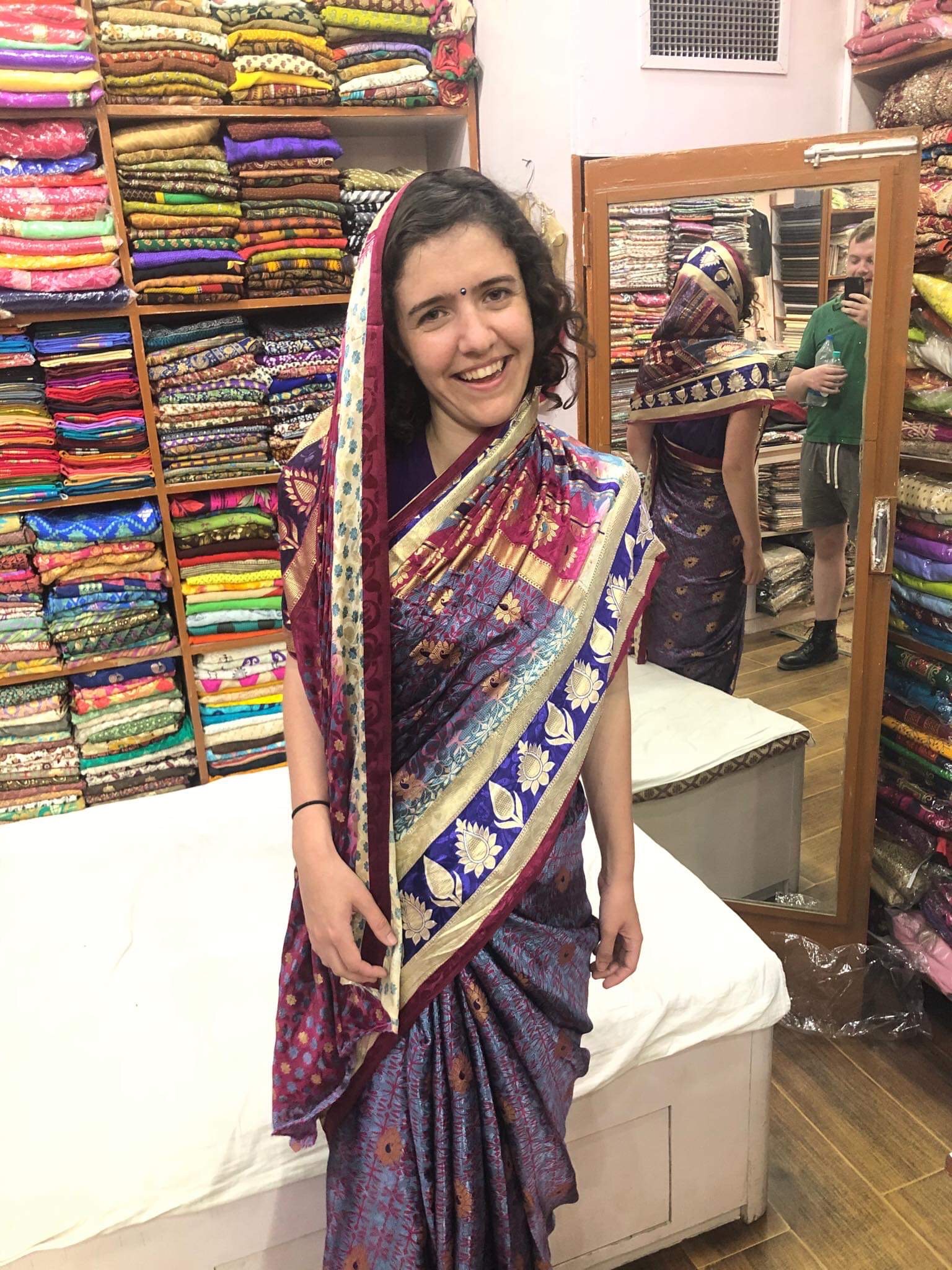 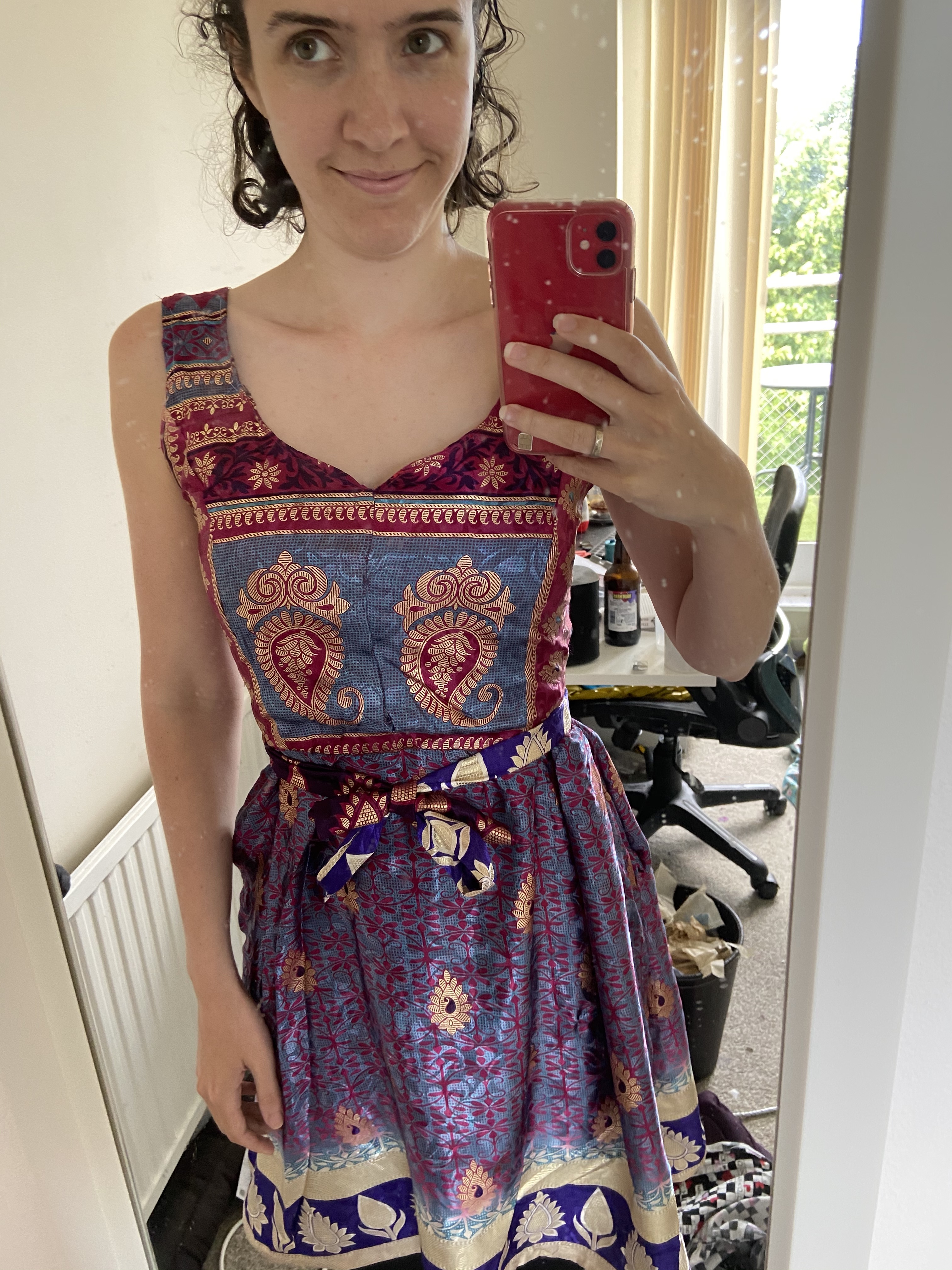 I don’t think it’s especially interesting to talk through everything that went into this process, but here’s a few things I learned doing this.

The thing that felt quite intimidating about this project upfront is that I really love the saree I bought. It’s got many patterns to it, I bought it in India and won’t be going back to get another one any time soon, and having browsed the internet, it’s fairly unique.

So, the idea of cutting it up and inevitably making many, many mistakes was quite intimidating. In order to avoid this and better understand how the pattern would sit when it’s all done, I bought 3 metres of cotton fabric in order to make a test dress which is effectively a run through of the pattern I wanted to use.

Alll donnneeeeeeeee! I had to take a good couple of centimetres off the sides to make it less baggy so guess I’m going to have to size down the pattern but in general, pretty happy with the result! 🥳🥳🥳 pic.twitter.com/iVOa35ePWB

I made many, many mistakes in the process - I sewed seams incorrectly. I didn’t get the fit quite right. I sewed down my lining when it turns out that wasn’t the right way. I interfaced, then un-interfaced my material as I’d realised I’d hemmed my dress too early.

I texted my mum a few times, wanting to confirm the instructions were accurate.

The result was that when it came to cutting up and sewing my saree, I was a lot more confident in how it fitted together and was confident in what I could and could not ignore. I could concentrate on the more interesting bits - choosing the areas of patterns I wanted to use, cutting silk properly. I also knew which bits I could “fix later” and which bits I absolutely had to go slower or undo ASAP.

On a wave of over confidence having finished my test dress, I dived straight in and cut my saree on a fold, knowing I had loadsss of it so figured I’d just dive straight in. It did not go well, and I was instantly annoyed with myself for lack of patience and that I now had material I couldn’t use for something better.

it turns out cutting silk is really hard. I’ve cut the front piece of skirt but...it aint straight and I dont think the border/fold is in the right place. Im probably going to redo it sadly + google it a bit. Glad I started with the skirt at one end of the saree, not the middle. pic.twitter.com/18fZlm6ZUV

Step 3 - pray. Quite a lot. I think it came out ok this time - edges are mostly straight (roller cutters are a present from god) and when I compare it against the template there isn’t much shrinkage this time pic.twitter.com/7EuZRPTB1p

Test your fit before you line it

On my cotton test dress, I sewed all the things together and then found it was hugely baggy. So I pulled it in at the last seam I had made.

This meant it just didn’t sit right - the sides are fine, but the front and back are baggy. With my saree dress, I instead took each seam in by a little bit, and adjusted it with pins here and there after trying it on. Since I’d done this before lining it, there wasn’t anything to undo to get to those seams.

Don’t drop threads on the carpet

My office floor (where I do my sewing) is probably 20% carpet, 30% hair and 50% random threads and bits of silk now. I’ve tried hoovering but a lot of the threads just won’t budge.

Check suggested fabrics before you work

I probably should have gone with a pattern that suggested using silk. As it stands I’m noticing a couple of the seams are putting pressure on the fabric, and gathering silk has caused some (not visible) damage.

Still, looks good, and I think so long as I take care of it and monitor those things, it should be good :)